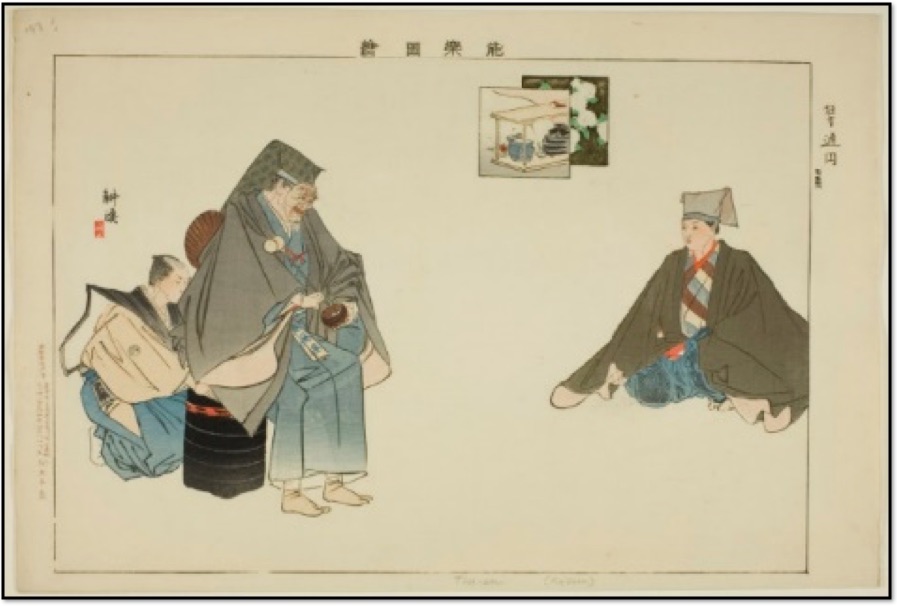 All names are written in the Japanese fashion, <Last name + First name >

In 1160, the first ancestor of Tsuen family, Furukawa Unai, was a samurai who worked for Minamoto Yorimasa. Furukawa retired, then changed his name to “Taikeian Tsuen Masahisa”

Taikeian is the name of building where Zen monks or other people go when they are trying to achieve enlightenment. Usually they change their name to “xoxan”.
“Tsuen” means Tsu – way or path and En means circle, round, or calm and En is a word from Zen. When a person gets older they have a better understanding of life so they don’t get upset as easily as they once did.
Anger is usually pictured as spiky or square shaped and round or circular shaped is pictured as happiness, calm, and relaxed. Tsuen means the path of the circle feeling. One often sees the picture of EN in Zen Art.

The founder, “Masahisa” took his name from the Chinese character “Masa” which is the first name from his master, Minamoto Yorimasa. It was the start of Tsuen Masahisa’s new life. He then became a guardian for the Uji Bridge.

At the time, there was only one way to travel between Kyoto and Nara, so the Uji Bridge was very important. The job name is “Hashimori” which required one to keep the bridge safe and clean.

In 1180, at the Uji Bridge, there was a huge battle between Minamoto troops and Taira troops. Minamoto Yorimasa and Tsuen Masahisa both fought there. Unfortunately, the Minamoto troops lost so Yorimasa committed suicide or “Harakiri” at a special place called “Ougi no shiba” in Byodoin Temple. Tsuen Masahisa followed his master Yorimasa’s example. That is why their graves are both in the Byodoin and why they are buried close together.

DESCRIPTION OF THE NOH “YORIMASA”
AND THE KYOGEN “TSUEN”

The “Tsuen” kyogen is a parody of the Noh play “Yorimasa”. The Noh “Yorimasa” is about the battle at the Uji Bridge and it shows how hard fought the battle was and how many deaths took place.

The Kyogen “Tsuen” is about the making of tea and holding a service at the Uji Bridge and how many travelers die. During both plays a dancer holds items specific to each situation. In “Yorimasa” the actors uses a Katana – sword, a Yumi – an arrow and in “Tsuen” the actor uses a Hishaku – a bamboo tool to scoop hot water from a kettle at a tea ceremony, a Chasen – a whisk bamboo used to mix a bowl of Matcha tea, and a Chawan – a tea bowl for Matcha. 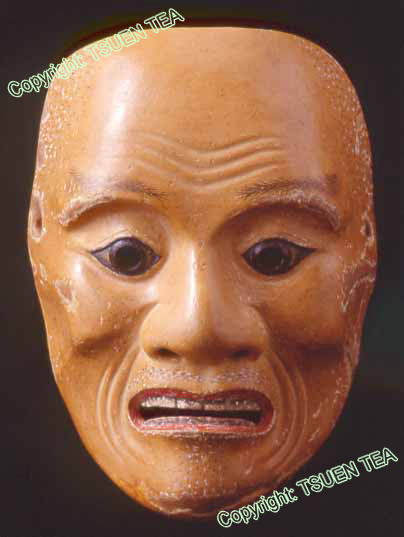 In the “Yorimasa”, the main Noh actor dances with swords and shows how he battles the advancing enemy. His sword finally breaks and he has no way to continue fighting which leads to his eventual death.

In the “Tsuen” Kyogen, the actor makes tea for travelers with tea utensils and also holds services for the spirits of dead people. His utensils then break and he also dies. If people know all the historical background and the relationship between the two men they can understand the parody between the plays.

Not many people can play the lead part in the “Tsuen” Kyogen because most of the action takes place on a chair so movement of the character is demanding and very intricate. There are only a few people who now act the lead role in the “Tsuen” Kyogen in Japan. The Noh play is entitled “Yorimasa” which takes its name from the founder of the Tsuen tea shop so for the kyogen, they used his last name, “Tsuen”. From the time of the battle all of the Tsuen ancestors performed the jobs of bridge guardian and tea maker. 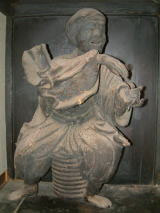 Statue Of Tsuen made by Monk Ikkyu
You can see the same posing as the Kyogen Tsuen.