Tsuen Tea is an independently owned family company established in 1160 C.E. It has operated continuously until today, making it Japan’s oldest teashop.

Since its founding, the shop has stood at the eastern end of the historic Uji Bridge in Uji, Kyoto. The current building remains nearly unchanged since it was built in 1673, and is the most recent in a series of shops owned by the Tsuen family on the same site since the year 1160. Today’s Tsuen teashop’s traditional interior is defined by an exquisite collection of antique tea jars, a traditional kitchen well, low ceilings and exposed beams. Over the last nine centuries, there have been many connections and references to the Tsuen family and teashop in traditional Japanese art, literature, theatre, ceremonies, and festivals. 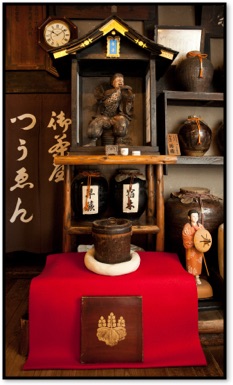 The first Tsuen was born Furukawa Unai; his Samurai name was Tsuen Masahisa. He had retired in 1160, but in 1180 his lord Minamoto Yorimasa (1104-1180) raised an army to fight the Heike Clan, as retold in the famous Tale of the Heike. Tsuen joined Yorimasa’s Minamoto army, but it was defeated by the overwhelmingly strong Heike force. Both Yorimasa and Tsuen came to a heroic but tragic end. The two men’s deep relationship throughout the story of their dramatic battles were later depicted in the traditional Noh drama theater play, “Yorimasa,” and also the Kyōgen comedy play, “Tsuen.” Their legendary end took place at the famous Ōgi no Shiba (the garden shaped like a fan) within Byōdoin temple, now listed as a UNESCO World Heritage site.

The 7th-generation Tsuen teashop owner was very close with Ikkyū, (1394-1481) the renowned and controversial Buddhist monk. So much so that the latter sculpted a statue of Tsuen. Moreover, upon hearing of Tsuen’s death, Ikkyū rushed to his friend’s deathbed and composed a poem, immortalizing their last meeting on a hanging scroll: “A life, a coin, the froth on a cup of tea.” It resonates like a kōan, the Zen mind puzzle that helps acolytes attain enlightenment. The 10th and 11th Tsuens were charged with supplying water for tea for the famed Shogun Toyotomi Hideyoshi.  Since then, the Tsuen family has served tea on the same spot for 23 generations. Ryōtaro Tsuen is the current owner and Yūsuke Tsuen is the 24th generation of this family to serve Japan’s most famous tea in the country’s oldest teashop.

In 2003 Tsuen Tea opened an International Office in Vancouver, Canada. Yuka Tsuen is the daughter of Ryōtaro Tsuen. Yūsuke is her little brother.

Uji is one of the most renowned tea growing regions in Japan. It all began when a Zen monk named Eisai brought seeds of the tea bush to Kyoto from China over 800 years ago. In 1211, Eisai wrote Japan’s oldest book on tea, “Kissa Yōjōki,” or “How to stay healthy by drinking tea.” The monk Myōe Shonin later brought the seeds to the Uji area, and Uji tea became known as “Ujicha.” Due to Uji’s optimal climate, growing conditions, and proximity to Kyoto and the imperial court and innumerable Buddhist temples, Uji tea quickly became vital to the flourishing of Japanese culture. In particular, the Kyoto-based shogunate promoted Ujicha during the Muromachi era (1336 to 1573), when Kyoto flourished as the nation’s capital. This made Ujicha popular throughout Japan.The type of tea that was drunk almost exclusively until the mid-1700s is called “tencha,” ground into a powdered tea known as mattcha. It was mostly drunk by samurai, monks and aristocrats as a part of tea ceremony, a meditation aid, or to provide energy prior to battle. In 1738, the Uji tea innovator Nagatani Soen created the process of making sencha. This made tea more accessible for the masses. In the mid-1800s, Uji innovated the production of gyokuro.

All of our organic teas are certified by JONA, the certification body of the Minister of Agriculture, Forestry and Fishery.

In addition, our teas that are not organic undergo strict tests to meet the guidelines of the Japanese government: each individual tea field is scientifically tested to maintain health safety standards. The two basic methods of growing Japanese tea are in the shade and in the sun. Shaded tea is covered with a straw or cheesecloth several weeks before harvest. This gives the tea a milder flavour. The kinds of tea grown in this manner are: Gyokuro, Kabusecha, and Tencha. Tencha is later stone-milled into Matcha. Non-shaded teas are stronger tasting. The teas grown this way are: Sencha, Genmaicha, and Hojicha.